All posts tagged with faithfulness

Who was Desmond Doss?

With release of the Mel Gibson's new movie 'Hacksaw Ridge', many are wondering about the faith background of Desmond Doss?  At the centre of this true story is Desmond T. Doss, an army medic who served in the United States army during World War 2.  He was present in the battle of Okinawa and is credited with saving the lives of 75 soldiers.  What makes this medic unique, is that he did it without ever carrying a weapon.  Due to his efforts on the battlefield, Desmond Doss was awarded the Medal of Honour, the highest military honour in the United States.

Doss was a Christian, a member of the Seventh Day Adventist Church. As an Adventist, he believed in the ten commandments and lived by them, including the sixth commandment which states, ‘Thou shall not kill’. For Desmond, the matter was clear, a “God said” matter, "If you love me, you won't kill." With that picture firmly embedded in his mind, he determined that he would never take life.

Consequently, labelled as a conscientious objector for having declined to bear arms due to his belief, his strong faith in God lead him to instead carry a bible and the power of prayer into battle as weapons. Ridiculed, bullied, and even cursed at by his fellow soldiers for his stand, his commanding officers also made life difficult for him. But his faith in God was unshakable. 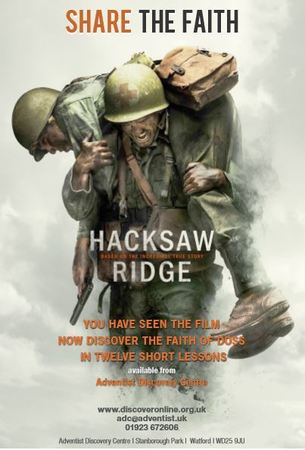 But then came the battle of Okinawa, Japan. It was one of the bloodiest battles of WW2. Doss saved 75 men without firing or carrying a gun. On the front line of the battle, he evacuated the wounded from behind enemy lines, under constant gunfire and artillery bombardment. He saved the lives of his fellow soldiers. The bullied one had become the hero.

Doss also believed in honouring the biblical Sabbath and keeping it special, a holy day, for the worship of God. This meant that Doss did not work on the seventh day of the week - Saturday. But he did serve on Sabbath as a medic while in the military, due to the example of Jesus using the Sabbath as a day for healing. It’s a principle the local group of Seventh-day Adventists in Banbridge hold dear. While believing that the 10 commandments to be still binding for the Christian in response to God’s love and graciousness at the Cross, Sabbath is a day of joy and delight, focussed on God, but also a very specific day to help make family, friends, and the community a better place to be.

You can find the full Desmond Doss story at the adventist.org website.